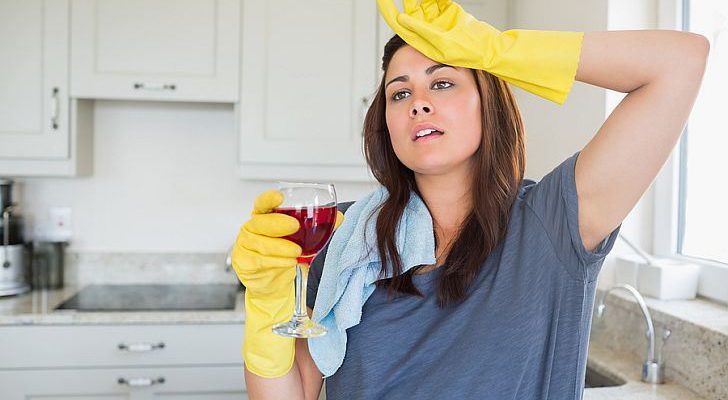 WHY CLEANING MAKES YOU FEEL GOOD

If you’re guilty of having an untidy home filled with mess and clutter, you’re not alone. But did you know that clutter and materialism can lead to stress and anxiety? A recent study by Havas Worldwide revealed that 50% of us could live happily without most of the things we own. We love to accumulate things, and the more stuff we have, the more anxious, depressed and joyless we feel. There’s a lot to be said for living with less, and having too much clutter could seriously impact your psychological health – also making it harder for you to clean your home which could leave you feeling stressed out.

A study carried out at the University of California measured stress hormone levels in 30 couples. Women who described their home environment as chaotic or messy had higher levels of cortisol, when measure at various points throughout the day. Interestingly, men seemed to be less affected by a messy, cluttered home.

Buying less stuff is the obvious way to cut back on clutter and enjoy a cleaner, tidier home, but what else can you do to ensure you don’t disappear under an ever-growing pile of stuff? Well, you could start by spending money on experiences rather than things – living with less and experiencing more is definitely more fulfilling, so instead of buying a new pair of shoes, enjoy a workout at the gym or see a film at the cinema with friends.

A great way to begin de-cluttering is to clear out your wardrobes and cupboards and place things you don’t use in some large storage boxes. Come the end of the month, any items you haven’t used can be donated to charity! Obviously be sensible about this – don’t throw out all your winter jumpers just because it’s summer – but try to be as ruthless as you can when it comes to things that you clearly don’t need, wear or use. Don’t be tempted to refill empty spaces either; once you’ve started to de-clutter, enjoy the minimalism!

Cleaning your home not only improves its cleanliness, it can also boost your mental health – it’s true. A study by the British Journal of Sports Medicine revealed that carrying out 20 minutes of physical activity a week could impact depression (1) – so why not make your chosen activity cleaning? A Scottish Health Survey where 3,000 people reported anxiety and stress revealed that carrying out regular, vigorous housework could cut these feelings by up to 20%. Of course, this doesn’t include a little light dusting; you need to be carrying out activities that leave you breathless.

Let it all out

Cleaning can be an outlet for energy and negative emotions too. Removing dust, dirt and clutter from your environment provides you with a cleaner, more comfortable atmosphere so you can feel happier and more relaxed. You’re more likely to be able to unwind if you feel like your cleaning ‘to-do’ list has been ticked off.

Research has also revealed that a cleaner home could lead to healthier food choices. A study published in Psychological Science journal revealed that those who worked in a neat, tidy space for 10 minutes were twice as likely to choose an apple over a chocolate bar than those working in a messy, chaotic office (2).This could be because your brain craves comfort food to cope with stress caused by untidy surroundings. And we all know that eating a healthier diet with plenty of fresh fruit and vegetables can boost your mental health!

According to a study by Indiana University’s Physical Activity Department, cleaning is important for good physical and mental health (3). The study looked at the physical health of 998 people aged between 49 and 65, comparing their levels of physical activity and the cleanliness of their homes. The results showed that those with the cleanest homes were also the healthiest and most active. Nicole Keith, the study’s leader, commented, “At the end of the day, the interior of their house seemed to be the only thing affecting their physical activity.”

Whilst cleaning is a great way to enjoy a tidy, un-cluttered house and feel happier, like anything we don’t suggest taking it to extremes! Hovering your living room twice a day and being obsessive about your cooker being clean is bad for your stress levels and could lead to the development of obsessive-compulsive tendencies. Keeping on top of your cleaning with a once or twice weekly clean should be enough for most of us – if you have kids or pets you may need to spot clean in between times!

At the end of the day, a clean, tidy house is a natural mood booster. So bear that in mind next time you’re tackling surface dirt or giving your kitchen cupboards a deep down clean. A dirty, untidy home could affect both your physical and mental health; now where did we put that mop?

What makes Cleanmate trusted above other cleaning service providers? When you combine higher standards, smarter strategies and superior quality all in one package, the result is top notch.